I love reading poetry (especially out loud) and I’ve been scribbling poems in a notebook for quite a few years now.

2013 was a big year for me poetry-wise. Around the middle of the year The School Magazine sent me an email to say they wanted to publish two of my poems. If you’re in NSW and/or you are a regular reader of The School Magazine, you can read the first of those poems in an issue coming out very, very soon. (It’s a poem about … something quite odd.) 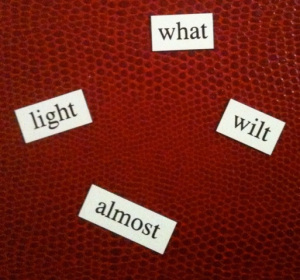 The first words on the poetry tag blog. For Sally!

Then in October 2013 I  started playing Poetry Tag with Sally Murphy. We take it in turns to throw a bunch of words on to the Poetry Tag website, yell ‘Tag! You’re It!’ and then the one on the receiving end has to weave those words into a poem. When they’ve posted a poem, they get a turn at throwing a bunch of words on to the site. It’s just for fun and there aren’t many rules. Other than the rule that the challenge words must be included in the poem, the poem-writer can come up with any sort of poem they like. Sometimes it’s tricky and the challenge words won’t behave and I desperately want them to go into places they won’t. And other times the poems almost write themselves. (Want to read my latest poem? Sally gave me the words ferocious, two, hole and brilliant and I came up with a ferocious poem. )

If you’re stuck in a rut it’s a fun way to get unstuck. You could use our words when they go up on the Poetry Tag website if you like. We’re generous like that. Or you could ask someone sitting nearby to give you some words to play with.