I love pottering around in our (rather small) kitchen garden and I like to plant seeds rather than seedlings. I’ve got some seed packets of vegetables — heirloom varieties — but last year lots of the seeds I planted directly in the soil didn’t germinate. So this year (three weeks ago, in fact) I decided to try planting them in seed-raising trays and then planting them out. Here are some before shots: 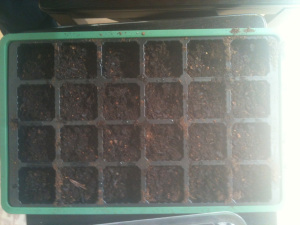 In this tray I sowed seeds of lettuce, sunflowers, beetroot, tomatoes, tansy, and capsicum. (There were actually two trays like this, but they looked exactly alike, so … well … you know.) 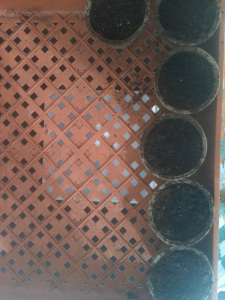 In this tray I sowed cucumbers.

My kids eat a lot — A LOT — of cucumbers. So, in the second tray I planted three varieties of cucumber: burpless, mini lebanese, and lemon. These are in cups I can plant straight into the soil and the cups will break down naturally as the seedlings grow. (Cucumbers don’t like to be disturbed too much, so this makes transplanting them easier. <– I almost sound like I know what I’m doing, don’t I? Ha!) 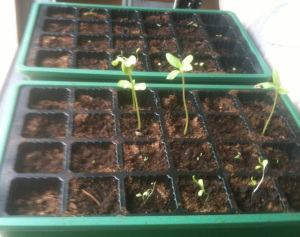 Magic! (The giants are sunflowers.)

Only 4 out of 12 sunflowers germinated, but then they took off pretty quickly. The second biggest are lettuces. I sense a few salads in our future … 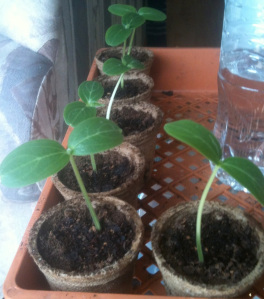 I planted the cucumbers and the sunflowers into the ground today. Spring is here!

Do you grow your own veggies or fruit?